This January, we continue our series of unpublished papers on issues of historical dialogue, historical and transitional justice, and public and social memory. Our featured paper is Derek Charles Catsam’s “The Ambivalence of Forgiveness: Dirk Coetzee, Eugene de Kock, and South Africa’s Truth and Reconciliation Commission.” Please do check out our newest paper and add your thoughts and comments below!

The Historical Dialogues, Justice and Memory Network is now taking submissions to feature in the Working Paper (WP) Series for 2014-2015. We are looking for unpublished texts that emerging scholars, practitioners and others are willing to “workshop” within our intellectual community.

The working paper series is an excellent opportunity to receive interdisciplinary feedback on your ideas and writing. We encourage you to send questions and Working Paper submissions to co-editors Michelle Bellino and Cathlin Goulding at dialogues@columbia.edu.

South Africa’s Truth and Reconciliation Commission (TRC) has become something of a model for the world. In Latin America and Africa the TRC process has been emulated to varying degrees of success. Post-conflict environments in Europe have invoked the TRC model. Even in the United States people have proposed truth commissions for events ranging from slavery to the George W. Bush administration’s torture policies. And in many ways the TRC was a remarkable thing that represented South Africa’s transition from the long years of draconian apartheid rule to non- or (perhaps more accurately) multi-racial democracy. Yet the TRC, for all of the good that it did, was far from perfect and among South Africans and close observers it engendered considerable ambivalence. This article investigates South Africa’s TRC with particular attention to two former security force officials, Dirk Coetzee and Eugene de Kock, who turned on their former colleagues and provided invaluable evidence that helped crack the code of silence that dominated the security forces and government. South Africa’s TRC was vital to the country’s transformation, but it was no panacea—the TRC is crucial to understanding not only South Africa’s era of transition and for addressing ongoing and future post-conflict environments. 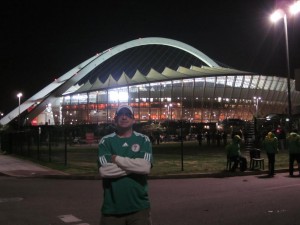 Derek Charles Catsam is an associate professor of history and the Kathlyn Cosper Dunagan Fellow in the Humanities at the University of Texas of the Permian Basin. He is the author of three books, including Freedom’s Main Line: the Journey of Reconciliation and the Freedom Rides, (2009, paper 2011), Beyond the Pitch: The Spirit, Culture, and Politics of Brazil’s 2014 World Cup (2014) and Bleeding Red: A Red Sox Fan’s Diary of the 2004 Season (2005). He is currently working on a book on bus boycotts in the United States and South Africa in the 1940s and 1950s. He has contributed numerous columns and articles on American and African politics and sports to many publications. Catsam lives with his wife, who is also a historian, in Odessa, Texas, and maintains his lifelong love for Boston sports teams.